This morning I was invited to see the very rare Fisher's Estuarine Moth, a species which turns up in a garden moth trap in Tankerton. Also I had 22 species this morning in my garden, of which The Mallow was new for the year. 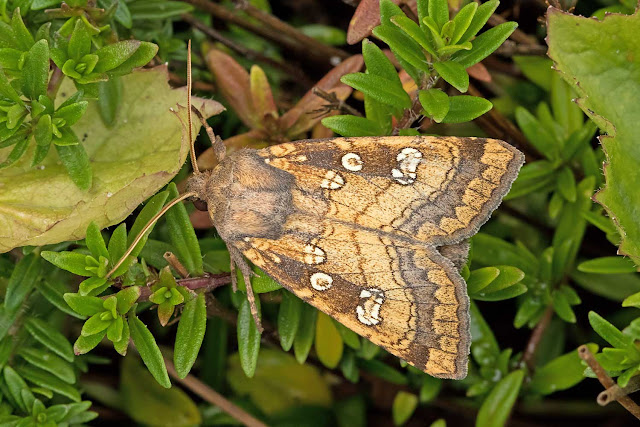 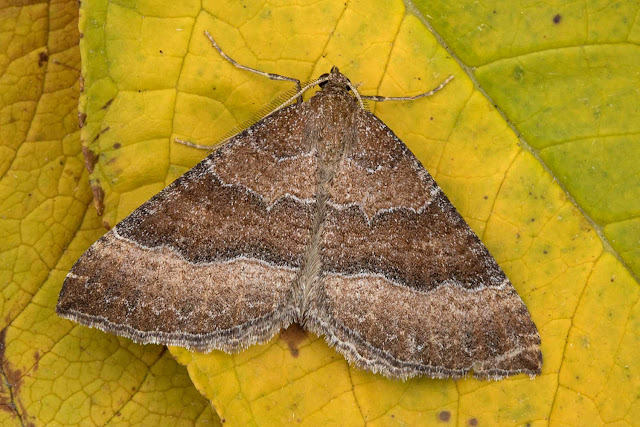 It was very mild last night with heavy rain forecast but I thought I'd put out the trap, and was rewarded with my first Clifden Nonpareil in the garden. It was a rather battered individual which I have tidied up with a bit of photoshopping. Garden list now 598. 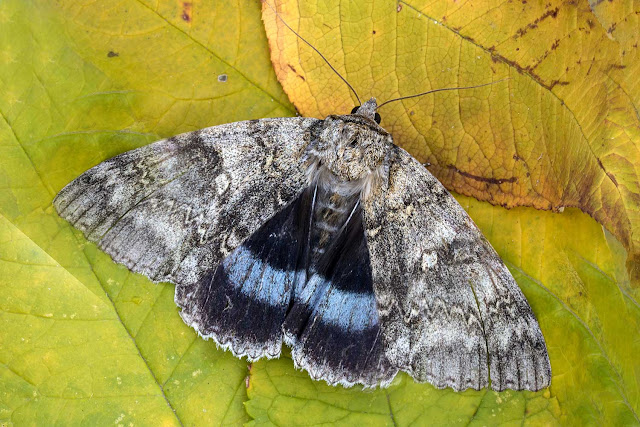 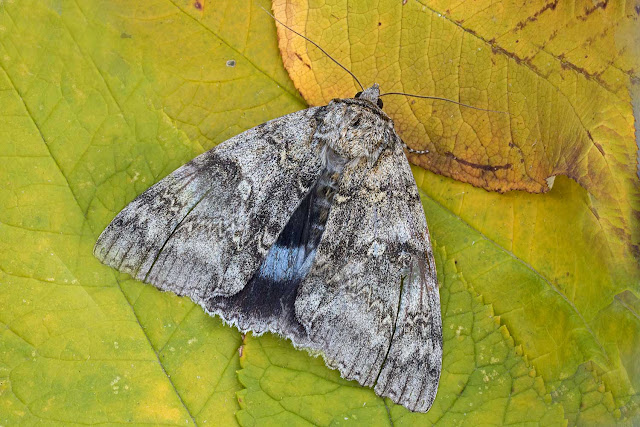 Posted by Boughton Moths at 10:52 No comments:

Moth numbers have picked up with a few milder nights. Best record was my 2nd ever Brindled Green, the first since 2006. Also the first Feathered Ranunculus and Acleris sparsana of the year. Today I noticed a bug on the kitchen window which proved to be a Western Conifer Seed Bug-an introduced american species. Today at Oare I counted 13 Little Stints, a Curlew Sandpiper with the Long-billed Dowitcher showing well again. 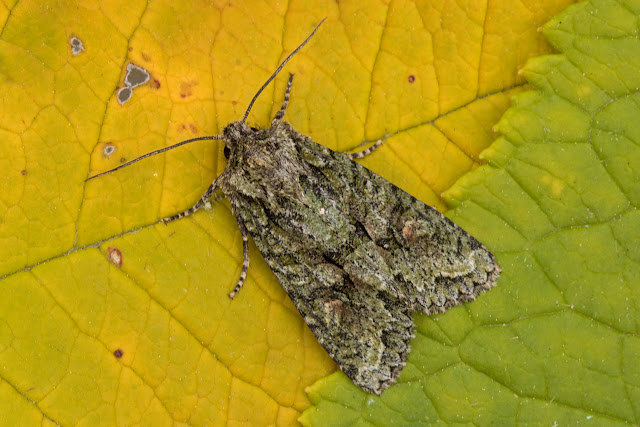 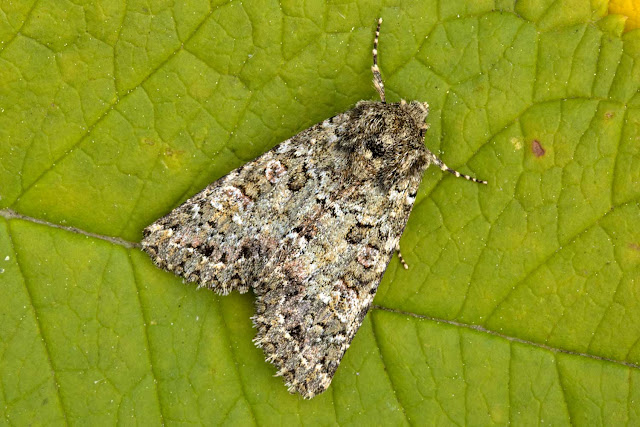 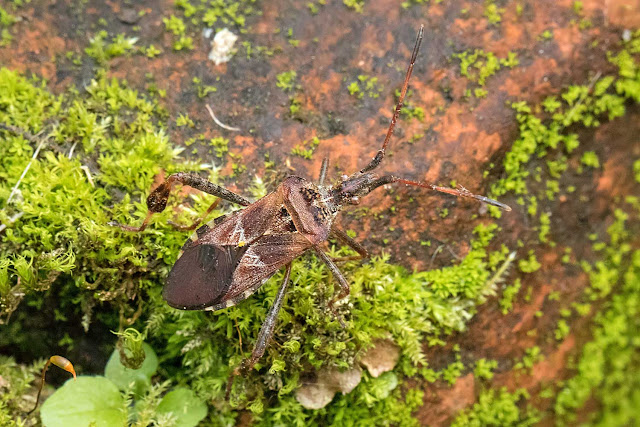 Posted by Boughton Moths at 23:25 No comments:

A run of cold nights had kept moth numbers very low since my last post with just a few Lunar Underwings and a single Black Rustic new for the year. 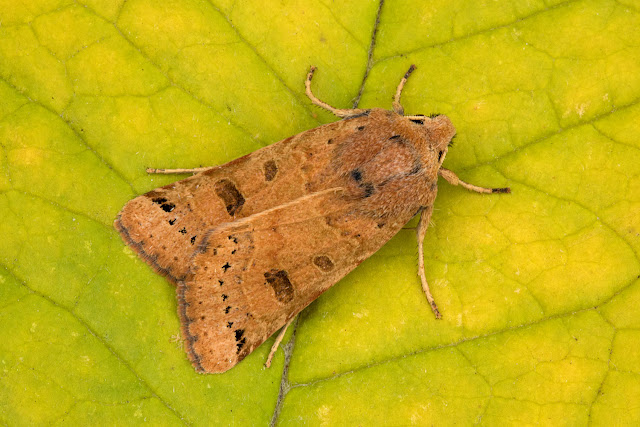 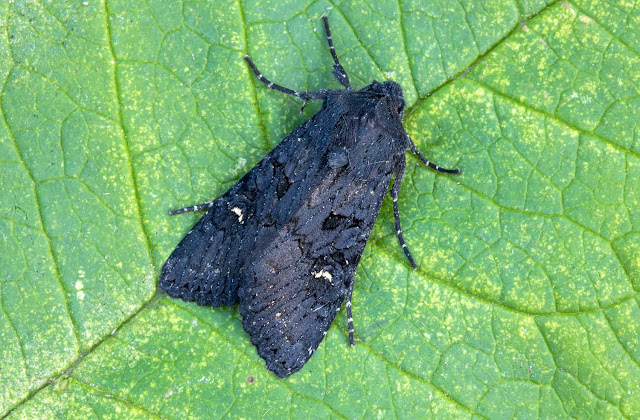 Posted by Boughton Moths at 19:12 No comments:

Moth trap numbers have fallen sharply but I was pleased to see my first Feathered Gothic for 4 years. Today I had another day at Dungeness in challenging weather-namely gale force winds all day. There were around 6 Great White Egrets on the ARC pit and we again managed a fairly distant view of the Osprey from the reserve but not much else. So a message that there were Grey Phalaropes at the Fishing Boats had to be followed up and we enjoyed a prolonged close view of one-my first for 2 years. 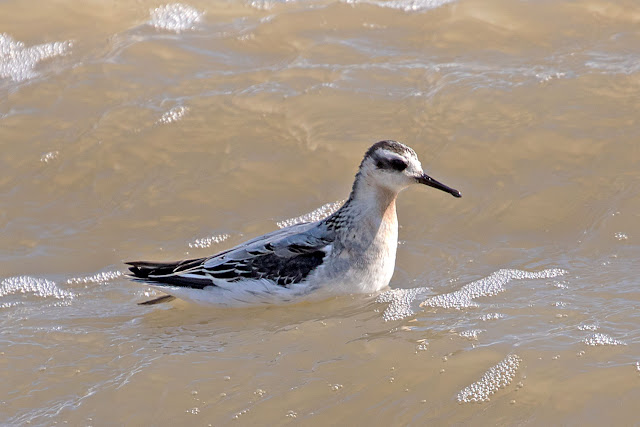 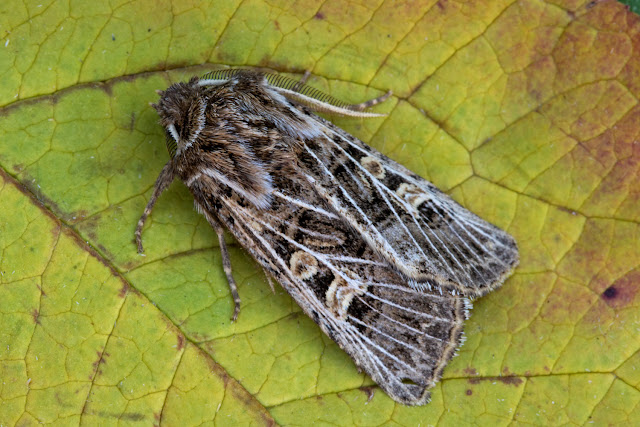 Posted by Boughton Moths at 21:06 No comments:

Friday at Dungeness was a wet and blustery day. Osprey was the target species and we did get a distant view of one from the Hanson Hide on the ARC pit. Other birds of prey seen in that area were Hobby, Peregrine, Sparrowhawk and Marsh Harrier. Three Little Stints were also present plus a couple of Garganey in eclipse plumage. Yesterday afternoon at Oare there were 6+ Curlew Sandpipers amongst the 100s of birds on the East Flood at high tide. Moth trap numbers have fallen further with the cold nights (7c last night). This morning second records for the year of Centre-barred Sallow and L-album Wainscot continued the autumnal feel. 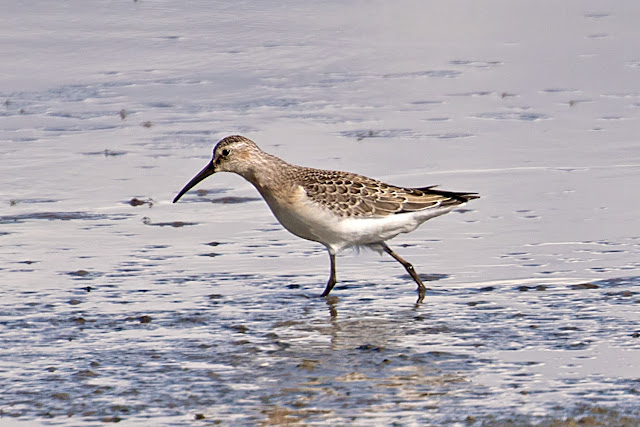 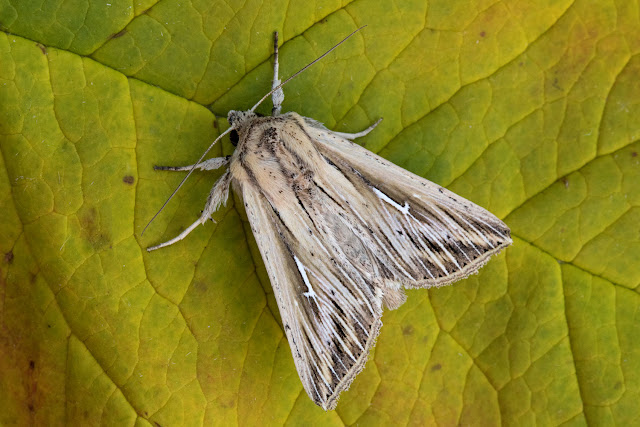 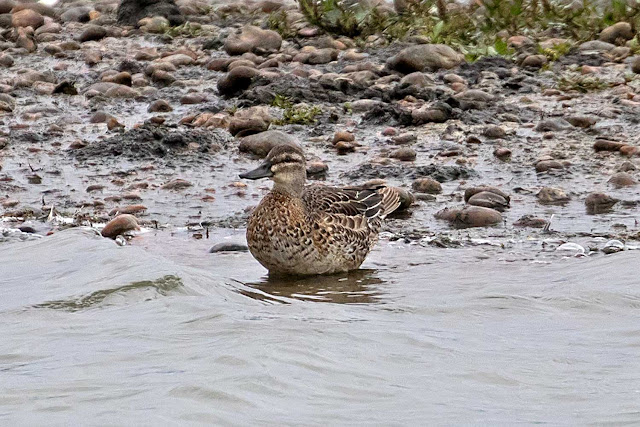 Posted by Boughton Moths at 10:34 No comments:

I feel autumn has arrived now with the first Centre-barred Sallow of the year in the trap this morning. With a couple of micros recently, the year total has now reached 352 species. Also at Seasalter this morning along the sea wall west of the Sportsman there were 2 Whinchats and 3 Wheatears plus a Clouded Yellow Butterfly. 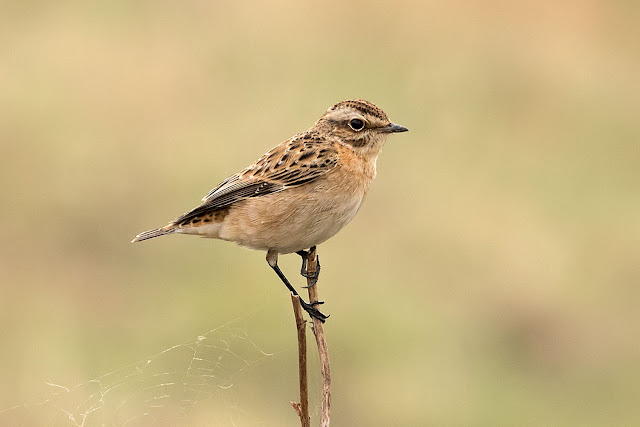 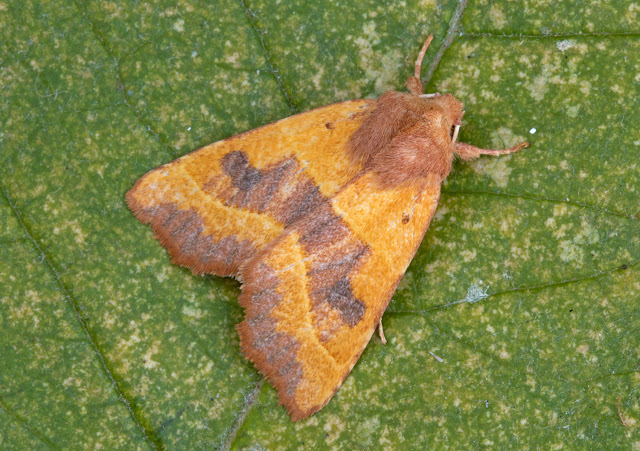 Posted by Boughton Moths at 20:25 No comments:

Since the rain on Wednesday and cooler nights, moth numbers are down, but earlier this week I added another new micro to the garden list: Stenolechia gemmella. We've reached the end of another month and it's been an exceptional year with the moth trap. Previously last year had been my best year with 318 species, the first year in 17 that I'd passed 300. This year I'm already on 348, with 4 months still to go. Birdwatching has picked up over the last couple of days. On thursday at Dunge the highlights were the Pectoral Sandpiper on the ARC pit, which could be elusive at times, and the 5 Cattle Egrets with cows near Boulderwall Farm. Other birds noted were Greenshanks, Common & Green Sandpipers, 6 Great White Egrets, 2 Garganey, and a Hobby. Yesterday afternoon at Oare in perfect light the Red-necked Phalarope, Long-billed Dowitcher and Bonaparte's Gull all showed well. Also noted were 2 Spotted Redshank, Ruff, Knot, Peregrine and Buzzard. 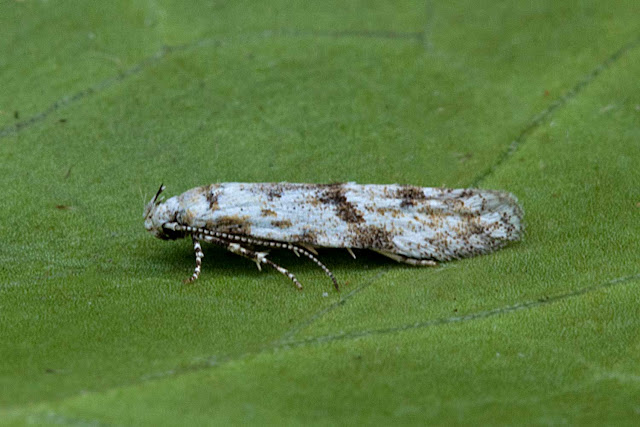 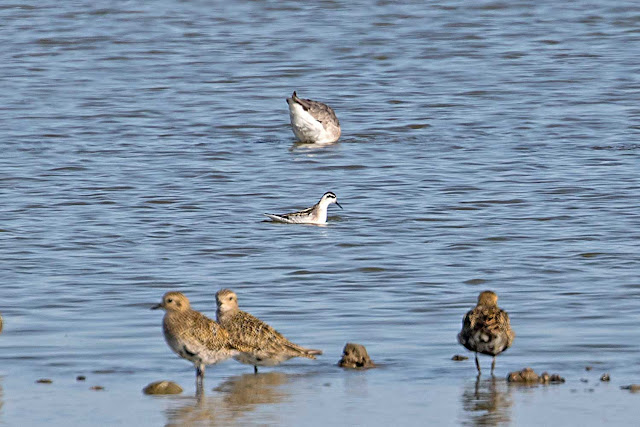 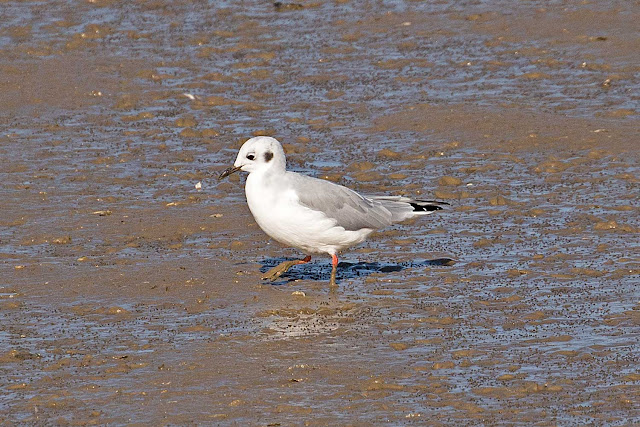 Posted by Boughton Moths at 09:58 No comments: