Still nothing in the trap following the LBAM. However, 2 days ago my wife found this moth flying in our lounge and it turns out to be a new species for the site list, and, of course, the first new moth for 2012. There is a similar species, A. ciliella,  which can be distinguished by examination of the fringe on the hind wing. I've had a go at this and concluded that this is Agonopterix heracliana-a common species in Kent. The other species is any case extremely rare in Kent. 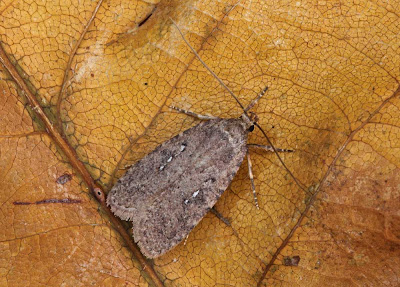 Posted by Boughton Moths at 11:16 No comments:

Well the first Moth of the year arrived this morning-the same as the last of 2011, a Light Brown Apple Moth!
Posted by Boughton Moths at 20:02 No comments:

Well there was nothing in the trap this morning so the year ends quietly, with only one moth in the whole of December despite the generally mild weather. The 2011 year started with a Winter Moth on 6th January (see below) and finished with a Light Brown Apple Moth on 21st December. My last macro was a Turnip Moth on 29th November. However 2011 was still the best year with 284 species, 16 more than 2010. There were 187 macros and 97 micros. The Garden List stands at 466 species (301 macros + 165 macros). 2011 was the 12th year of trapping at this location and I was pleased to still get 31 new species (10 macros + 21 micros). The new macros were: Yellow Horned, Oak Hook-tip, Oak Tree Pug, Oak Nycteoline, Rannoch Looper, Peacock, Pink-barred Sallow, Orange Sallow, Peach Blossom, and Twin-spotted Wainscot. My next post will be with news of the first moth of 2012. 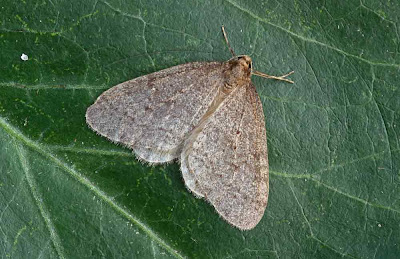